Ledger Projects is proud to sponsor the official launch of the build-up towards DELTA Summit 2018, which will take place in October 3rd to 5th.

If you missed the introduction and you want to know what this tutorial is about, please read the intro.

This part of tutorial is divided into three sections:

Note before you start: if you are using Windows you must use Power Shell as terminal.

Set up of the truffle environment

First let’s create the project folder called ethereum-vuejs-dapp, then open the terminal in the folder just created and run the following command:

This command initializes the truffle project and creates the following items:

Let’s add the details of our blockchain network to the file truffle.js. So first start Ganache and, once it runs, check the host and the port as shown below.

IMPORTANT: make sure that the host and the port of the code pasted in truffle.js match with the settings displayed in Ganache.

As described in the introduction, the main features of our dApp are:

The following information of a user’s profile is going to be stored in the blockchain:

What we need is to store the list of the users and associate each user with an account address (or wallet address).

The smart contract must provide a set of functions that:

Below is the code of the smart contract (you can find it on GitHub as well).

Deploy the smart contract to the blockchain

It’s time to deploy the smart contract to the blockchain! Make sure that your blockchain is running and the file truffle.js is properly set as explained before.

Go to the folder migration and create a file called 2_migrate_users.js.
The migration filename has a number as prefix and a description as suffix. The numbered prefix is required in order to record whether the migration ran successfully and the suffix just describes what the file is about.

Copy and paste the following code inside the file 2_migrate_users.js:

Now let’s open the terminal in the project folder ethereum-vuejs-dapp and run the command:

Once the truffle console is running, type the following command:

If everything went fine, on the console you should see a message as follows:

After the deployment you will see on Ganache some new transactions in the transaction list. 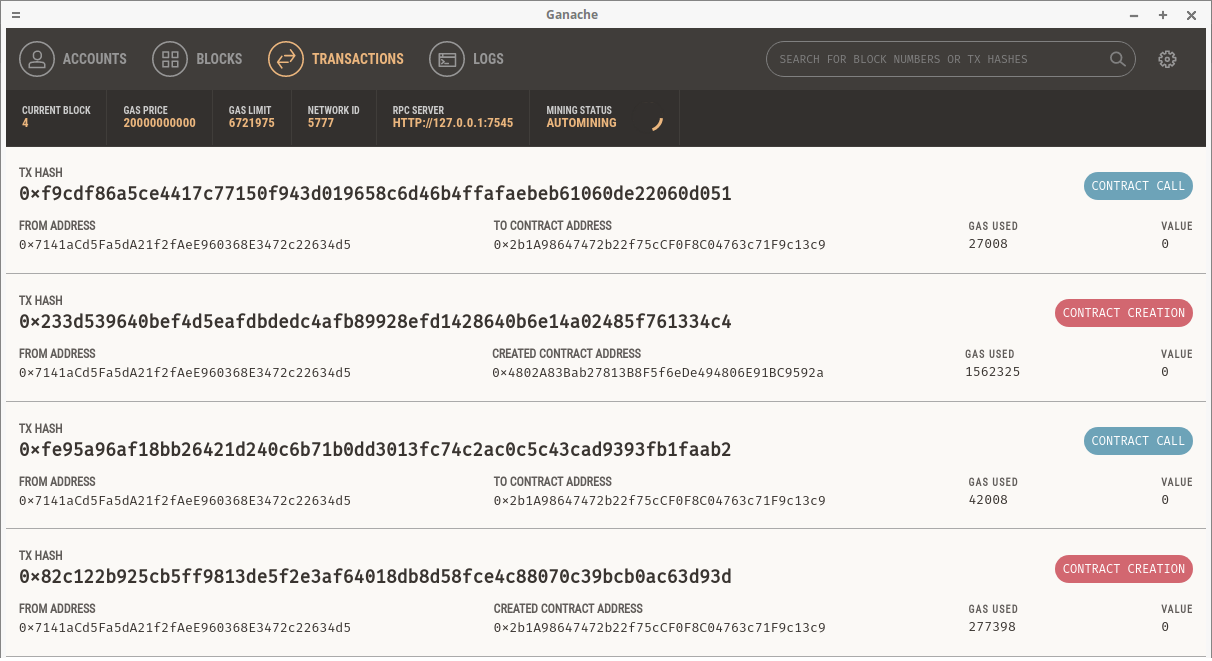 In the second part of the tutorial we will build the dApp interface using Vue JS and interact with the smart contracts through the interface.

The second part of the tutorial is on the way… see you soon!

This is a simple decentralized application built using Ethereum blockchain and VueJS for the front-end. This DApp example lets the users store their name and status on the blockchain. The DApp allows users to register their name and status on the blockchain. The user’s profile is associated with an account address (or wallet address).

The owner of the profile is the only person who can modify his own data. This will give you a technical explanation of what it means when the user is in control of his own data (just like Facebook… sarcasm!).
The smart contract is designed to give the user control of his own information and not even the creator of the smart contract can control any data.

This tutorial is split in two parts:

NOTE: if you want to try to add more profiles you have to install metamask in your browser, then import the accounts into metamask and finally change account on metamask in order to register a new profile.