Often a blockchain can have some flaws, bugs or it just needs improvements. To fix those vulnerabilities the blockchain has to be forked.
A fork rewrites the rules which a full node must follow in order to consider a block valid. A full node can decide either to accept the new rule (updating its software) or reject it.

If some nodes choose to support the fork while others choose not to do so, then a blockchain fork might happen: in this case the blockchain splits up in two different branches.
The two blockchains share the same chunk of chain from the genesis block to a certain block before the divergence. 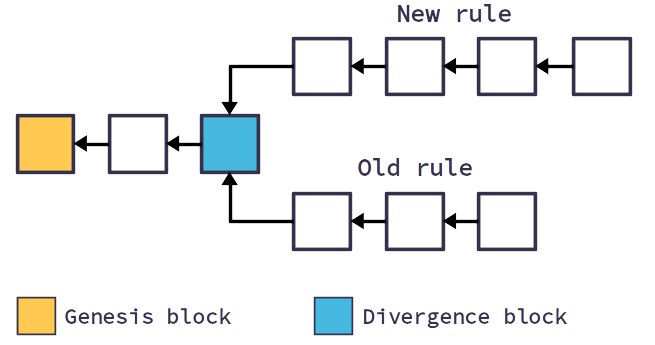 Let’s take some real examples.
Before August 2017, the bitcoin community was discussing how to improve the bitcoin transaction performance (aka scalability). The community had two different opinions:

In August 2017 the bitcoin blockchain split up in two branches: Bitcoin Cash [2] with an increased block size to 8M and Bitcoin that uses SegWit.

Another example.
In 2016 an attacker managed to use the vulnerability of ethereum security for his own good and many people lost their investments [3]. Within the ethereum community there were two ways to solve this problem:

In July 2016 the ethereum blockchain forked into Ethereum (with the flaw fixed) and Ethereum Classic (original protocol) [3].

What is the difference between hard fork and soft fork?

SOFT FORK: how does the blockchain fork happen?

If the hashpower of the full nodes that accepted the soft fork is 51% or more, then there will be no blockchain fork.

HARD FORK: how does the blockchain fork happen?

Here we have to consider two cases.

Obviously in case when 100% of the community supports or does not support the hard fork there will be no blockchain split.

[3] The stolen ether and the birth of Ethereum Classic:

Guide to Forks: Everything You Need to Know About Forks, Hard Fork and Soft Fork

What is a soft fork?

The differences between a hard fork, a soft fork, and a chain split, and what they mean for the future of bitcoin